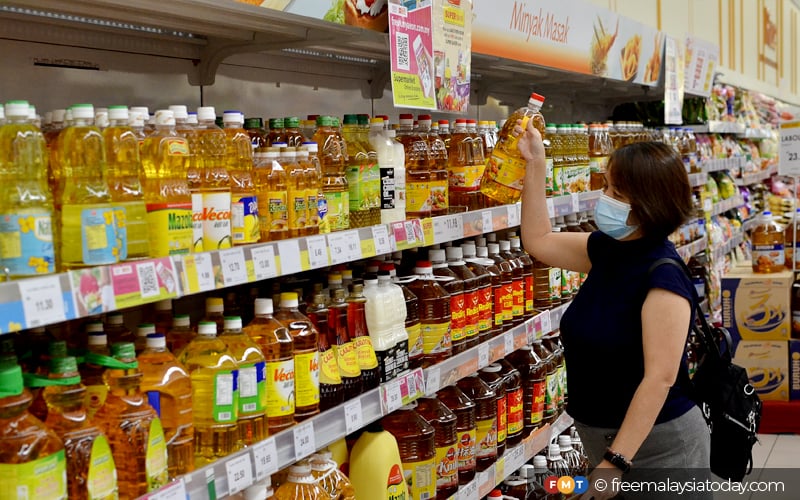 Further increases might be in store, according to the head of the Federation of Sundry Goods Merchants Associations of Malaysia.
Its president, Hong Chee Meng, said that a 5kg bottle of “Red Eagle” and “Knife” brand blended cooking oil currently retails at RM45, compared to the price before the Covid-19 pandemic of between RM30 and RM35, China Press reported.

However, an FMT check on online prices showed “Red Eagle” being sold for between RM38 and RM40.
Hong was quoted as saying that the price of “Buruh”, “Seri Murni” and “Saji” brands, which are produced with 100% palm oil, remain below RM30, because of government subsidies.

Among the causes of the increase were the new minimum wage policy, the depreciation of the ringgit, the Russia-Ukraine war, the lack of foreign workers in palm oil estates, and the increase of sea freight costs, he said.

Hong said it was impossible to predict if the price would continue to surge, but hinted at such a possibility.

“Even if the country allows for foreigners to work in oil palm estates, there are still three other factors that could affect the price of the commodity,” he was quoted as saying.

The recent implementation of the new minimum wage could see retailers up their prices to reap a 10% profit, he said.

On April 22, Indonesia banned the export of cooking oil and its raw materials to reduce domestic shortages and hold down skyrocketing prices. The move has caused a global increase in the price of cooking oil and related products.