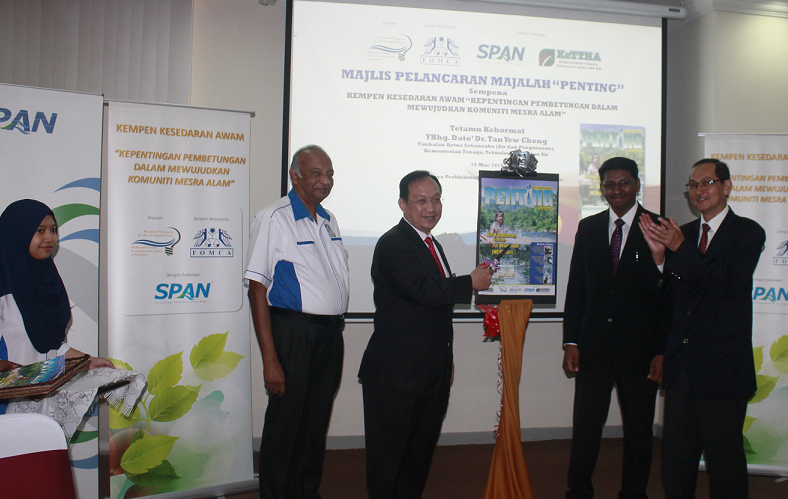 CYBERJAYA: The National Water Services Commission (SPAN) today launched a bi-monthly magazine to increase awareness on water, sanitation, and sewage treatment.
The magazine, named Penting, is a collaborative effort with the Water and Energy Consumers Association (Wecam) and will be distributed for free.
Energy, Green Technology, and Water Ministry deputy secretary general Datuk Tan Yew Chong said the magazine will also help the government's various environmental campaigns as it provides comprehensive information to readers and advises them on what they can do to help the government in water saving and recycling campaigns.
The launch of the magazine at SPAN's headquarters, he added, was also in line with government efforts to increase population access to public sewage systems from 68% to 80% and access to clean water from 97% to 99% by year 2020.
Tan reminded the public to empty individual septic tanks before they overflow and cause environmental damage.
He said SPAN is also working with Wecam in the "Building Environmental Friendly and Sewerage Savvy Communities in Malaysia" programme, which takes place from September 2016 to September 2017.
Penting will print 50,000 copies per issue and is slated to run from November 2016 to October 2017, with the first two issues already published and distributed.
The magazine is being distributed to schools, government agencies, companies in the water industry, and the general public.
Penting's launch was attended by Federation of Malaysian Consumer Associations (FOMCA) chief executive Datuk Paul Selvaraj and Wecam president T.Saravanan.
Source : The Sun Daily - 16 March 2017 http://www.thesundaily.my/news/2195827